I have been working with leaders at New River College to develop a suite of tools to support student’s personal development. To find out more about our work to date you are invited to watch the video below. For further information please use the contact page.

Delighted to have led a session on Managing Resources as part of the Confident Executive Leadership Programme run by Fig Tree International. Copies of the presentation slides can be accessed by clicking the following Link.
A pleasure to have worked with some very talented leaders. If you would like any further information about the content of the session, or have questions about setting and monitoring your school budget, please make content via the Content Page of this website. 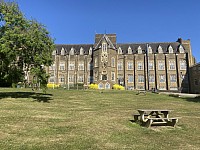 We have been supporting Virgo Fidelis School to transform their Pupil Tracking and Assessment systems and procedures.

Two vital resources have been provided to support the school:

Firstly, each subject department is implementing an electronic mark book to plan and record the assessments they make of pupils’ work each half term. A copy of the Excel ELECTRONIC MARK BOOK template is available on request via the contact page of this website. The instructions for using the mark book can be found here.

Secondly, the school have been using our extensive tried-and-tested PUPIL TRACKING TOOL to effectively monitor pupil achievement and identify appropriate interventions where pupils are at risk of underachieving. Again copies of the template can be obtained on request.

Training for Leaders at The Petchey Academy

Delighted to deliver training on IMPROVING TEACHING AND LEARNING for leaders at The Petchey Academy on 6 November 2020. The materials used during the session can be accessed by clicking PRESENTATION SLIDES.

We always welcome feedback on our work as it helps to improve the quality of our training and support. Please could those of who attended the training take a few minutes to complete our online EVALUATION FORM.

We have recently heard a lot about what adults think about the return to school in September after the extended Covid-19 closure. Teaching unions, school leaders and government ministers have all had their say. Some parents have also expressed their opinions BUT it is Pupils that have been directly affected by the extended school closure. Two questions must therefore be asked:

I believe that all schools should proactively gather and analyse the views of all students as soon as they return as possible. This will help schools to plan for their return of pupils in an informed way and to target support for pupils where it will have the biggest impact.

if schools would like to make use of our detailed ‘Covid-19  Return’ pupil questionnaire, please contact us via the contact page on this website. More specifically, we can offer three types of support for schools:

As well as providing vital information for school improvement purposes, the findings from a comprehensive pupil survey will be crucial for School Self-Evaluation purposes. The most recent ‘Guidance for education providers about Ofsted’s phased return to inspection’ (https://www.gov.uk/guidance/education-plans-from-september-2020) sets out how Ofsted will conduct visits during the Autumn term 2020. In particular, they state that:

“We will focus on carrying out visits. These will look at how leaders are managing the return to full education for their pupils, including considering ‘blended learning’ (on-site/remote education) and safeguarding”.

The inclusion of key findings from a survey of pupils’ views and the actions taken in response to the survey will provide direct and clear evidence that school leaders, in seeking to ensure the best possible return to school, have taken the opportunity to find out and discuss their views and experience with them.

Research has shown that regular and systematic surveys of pupils’ views about their school are the most accurate and effective way of not only identifying how well the school is performing but also what areas could and should be improved. Pupils ‘lived experiences’ of their school are therefore crucial and so it follows that their views must be central to evaluations of school effectiveness.

I have been extensively researching the role that pupils can play in school improvement for the past 17 years and have developed a unique and rigorous approach to gathering, analysing and understanding pupil perceptions. The methodology employed is based upon my Doctoral research and is therefore peer-reviewed.

The following postcard provides information for those Headteachers and School Leaders who are interested in knowing more about how we can support school improvement by providing a unique multivariate analysis of the perceptions of all pupils. 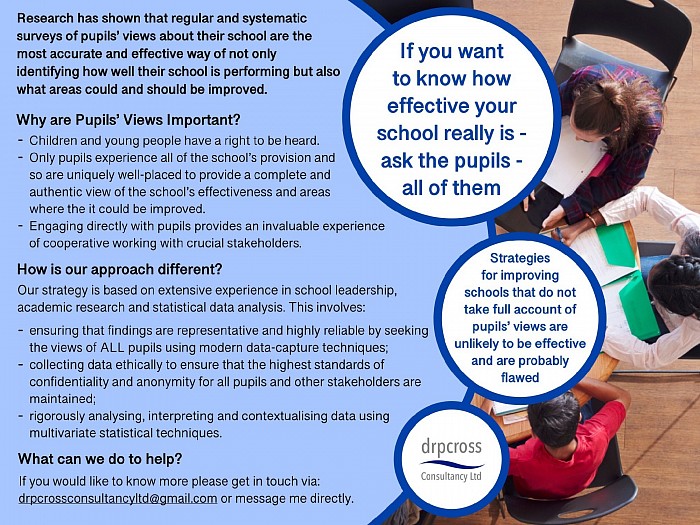 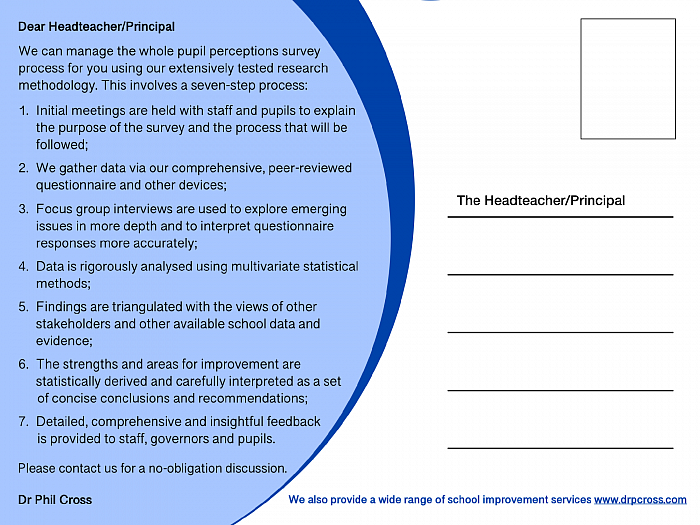 We recognise that school self-evaluation and it’s associated activities can place a significant burden on school leadership teams. We can help by providing a comprehensive, independent statistical analysis of your pupils’ perceptions and lived experiences of their school. This analysis includes statistically derived strengths and areas for improvement. Our feedback is honest, insightful and comprehensive.

If you would like to know more about this tried and tested strategy for driving school improvement through engaging with pupil perceptions, then please get in touch by clicking here to arrange a free consultation with no obligation. 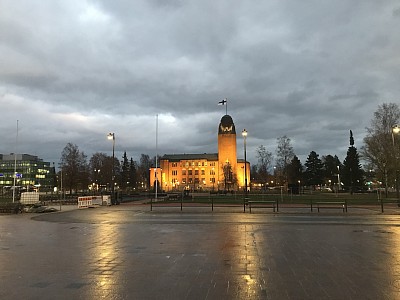 In October 2019, I was part of a group of school governors, senior leaders, teachers and Authority Officers from the London Borough of Croydon that visited Joensuu in Finland as part of an Erasmus-Funded visit to research the Finnish Education system and to understand why it is held in such high regard. A video that summarises our findings can be found by clicking the following link:

Although the Finnish culture is significantly different to ours in the U.K., there is much that we can learn. 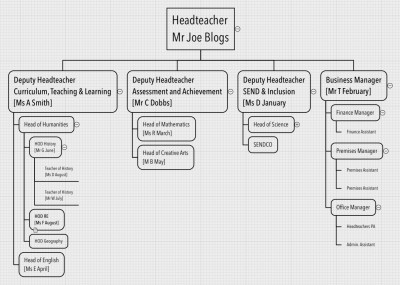 Whether reviewing an existing organisational structure, or designing a new one, it is is vital to adopt a method of displaying the overall staffing structure in an organised way. One approach is to utilise an organisation template within mind-mapping software to design and display all aspects of the school organisation structure.

I have often asked Headteachers to talk through their leadership structure whilst I chart it out in a mindmapping App on my iPad. The process invariably raises issues that need to be addressed at an early stage. However, it is sometimes not possible to adequately construct a structure diagram from the school’s understandings of the position ‘on the ground’. However, by auditing the organisational arrangements in this way, the issues quickly come to light and can be rectified.

In the structure diagram, each topic box can be used to store the title of the post and the person currently fulfilling that role. The advantage of building up the structure in this way is that line management responsibilities can be shown visually and the relationships between posts clearly signified. If necessary, vacancies can be highlighted accordingly. Other information can be added as attachments to the organisational chart - such as job descriptions and performance targets. In this way all information about staffing can be kept in one place. Staff photos can also be attached to the relevant posts.

Once complete, the organisational chart can be quite large. One of the big advantages of using an iPad is that it is possible to take a snapshot (photo) of parts of the structure - such as the leadership team or a subject department. If required, the information can be exported as a WORD document or POWERPOINT presentation, to form part of a report to governors.

If you are designing a new structure, it is important to build it around posts not people. Decide what needs to be done and how the responsibilities will be attached to posts. Once the structure has been agreed with the governing body, you can begin attaching people to posts.

I you are reviewing an existing structure there a are some key questions that arise:

It is important to keep the structure as simple as possible. For example, everyone understands the term ‘Head of Department’ or ‘Subject Leader’ but there has recently been a proliferation of titles such ‘Learning Centre Lead’, which introduce an unnecessary level of confusion.

Often these can become quite cumbersome documents so I would recommend using the Brighouse (1991) model of having job descriptions on a single side of A4 that emphasis three or four Principal Accountabilities (matters for which the colleague is the lead person in the school) and three or four Secondary Accountabilities (Matters on which the colleague is a supporting person in the formulation of policy). I would also add a list of three or four Non-Negotiable's (such as a commitment to equal opportunities, etc.). Job descriptions can be added to the organisational chart in two ways: by inserting them as notes attached to each role (or box in a mindmapping App) or as an attached file.

This is another aspect of the work a school that potentially generates lots of paper. Within a mindmapping tool, targets can be added as separate files for each member of staff using the agreed school pro-forma or simply added to the notes attached to each role or person.

Keeping the Structure Under Review

Once the task of completing the structure is complete, the final diagram can be widely shared electronically or (preferably) via A1-size posters. The structure can easily be revisited at regular interviews by school leaders and/or governors. From time-to-time it may be necessary to make amendments due to a growth or contraction of pupil numbers, staff resigning or changes to the national education framework. In such cases, changes should be made in the context of the whole structure rather than piecemeal.

Made with SimDif
Dr Philip Cross